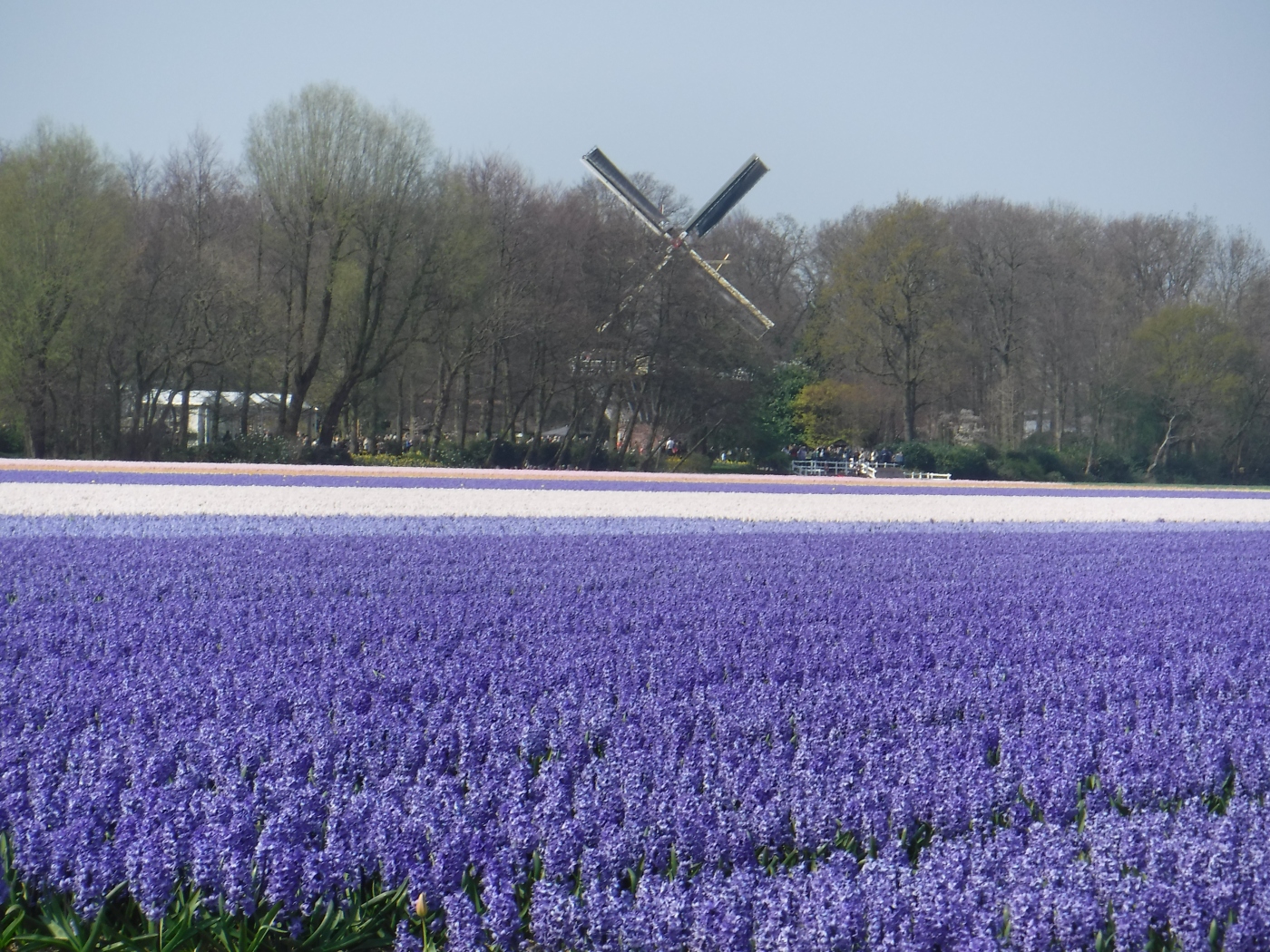 Spring in the Netherlands is glorious.  The fertile land bursts into bloom in March, more than making up for the miserable dark winters.   By April the bulb fields are at their peak with hyacinths, tulips and daffodils creating fields of colour.  If you have never seen flowers grown as a crop, it is quite spectacular.

I am lucky to live close to the bulb area, or “bollenstreek”.  Having driven and cycled around the fields many times, a couple of weekends ago I decided to see them from the water.  The Keukenhof was heaving with tourists, the bike paths around the fields were busy with cyclists, but except for the occasional Keukenhof tour boat, I had the water to myself.  As one of the only water users, I became quite a popular photographic subject and I can only assume that I am now famous in some Asian country or other!

As you can see from my photos, the many of the fields were in full bloom with the early bulbs. The scent from the hyacinths is overwhelming, and the daffodils and early tulips were bright yellow and red.

For most of this route motorised watercraft are not allowed, meaning no boat wakes to contend with and very still water.  However, it was windy and I got blown backwards when I stopped for a drink or to check my map.

If you don’t have your own board, but would like to do this route, contact my friend Talitha at SUPpen in Leiden. She will organise this tour on request and she also speaks excellent English.

Paddle alongside the Keukenhof carpark.

Paddle alongside the Keukenhof gardens and windmill and past the overflow carpark on the other side.

Follow the canal as it goes past some woodland, makes a dog-leg through farmland, under the train line, and through more farmland.

At the T-junction, turn right and paddle along the Leidsevaart canal in a north-easterly direction.

Take the next main channel to the right, Veeneburg Elsbroekkanaal, marked with a no-propellers sign.

Follow the Elsbroekkannal in a vaguely easterly direction. There are lots of drainage channels here and it can get a bit confusing from here on.

After going under the road bridge, turn left at the T junction.
Paddle a short way in a north easterly direction.
Take the next canal on the right in front of the nursery (lots of greenhouses). Paddle through the bulb fields in a south easterly direction for a while longer.

Take the 5th canal on the right (the others are dead-ends).  There is a small hexagonal sign on the north corner marking it as the Keukenhof Canoe route.

Follow this canal, it goes south west at first and then under a road . It then turns right, and then back left.

There are no side chanels so you won’t get lost but you may encounter Keukenhof tour boats along the way.